I stand at divergent paths, with my fur cape and water witching stick, dropping wizardly bombs.

Flidais and Pan are God and Goddess of Nature, and as such, they have been deemed the Guardians of the Untainted Forest -where The Mushroom Ambassador is frequently seen rolling around in Fairy Rings.

Otherwise, Nyx and Dionysus can be found, inspiring their Shamanhood to celebrate their inner diety through the performing arts -courtesy of The Word Vaccine.

Sometimes late at night, Koschei and Baba Yaga can be found grumbling and cackling at The Launchpad, while sipping Kraken rum through glow-in-the-dark straws.

This change in occupational direction was not too difficult for me, as I had previously dabbled in soft-core D/s relations -as the submissive.  Submitting appealed to me because such interactions subdued my ego, which enabled me to better discontinue my struggle against reality -thereby alleviating unnecessary suffering. With regard to my burgeoning shamanism, subduing my ego enabled me to more easily perceive the spirit world, thereby increasing my receptivity to messages from the spirit realm, and making me a more effective conduit of healing.

As my new occupation evolved, I came to understand that the behaviors, interactions, and activities involved in the fetish world all had the potential to be used as tools for obtaining energetic balance.

"If we wish to understand shamanism, we must know energy.

If we wish to understand orgasm, we must know energy.

If we wish to understand God/Source/Goddess, we must know energy.

Without these, there is no transformation."

After listening to hundreds of clients with my "shaman lens", I began to write theories based upon energetic balance as they relate to fetishes, and I also ran across more and more professionals in the field who incorporated a wide range of energetic practices - shamans, pagans, Reiki practitioners, tantric professionals, Buddhists, to name few.

This following is an excerpt from my upcoming book Cuckoldry: The Ins and Outs, which gives more insight into the energetic imbalances that lead to the fetish of cuckoldry and is written with my submissive audience in mind.

Everything in the fetish world, is a direct and/or indirect effect of our society's function/dysfunction.  Our "fetish" is our preferred method of reconciling our energetic imbalances.  We can attain energetic equilibrium through the use of dominant and submissive action/interaction.  Whether you are a natural born submissive or a natural born dominant, various societal pressure to behave in a dominant manner, can become energetically exhausting.

Most of my clients tell me right away that they have "always been submissive."  We all become desensitized and dissociated as we go through life, 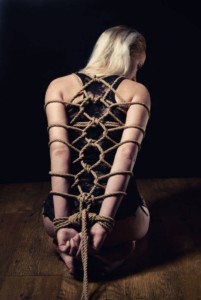 because that is how we survive the stress of being alive.  When this happens, we are no longer in touch with our feelings, and the statement of "having always been submissive" is usually reflective of our needs -and not how we are living.  The people who call me are those who have mustered enough courage to finally act on what they know they need, or who are at least ready to contemplate doing so.

The number one opportunity for energetic imbalances always comes from wherever we spend the most time - and that is usually the workplace.  Within a capitalist system, it is not uncommon to choose to accumulate substantial educational debt in order to acquire the education necessary to be occupationally competitive - which is why doctors, military personnel, and lawyers, are the top three occupations of my clients. Within these types of occupations dominant behavior is rewarded and submissive behavior is either ignored or tolerated -and in some cases it is frowned upon and even punished.

Geographic location substantially influences our energetic balance, as well.  Most of my clients are from New Jersey and New York - which is the most socially aggressive region in the United States and produces an over-load of dominant energy. Feeling constantly defensive and threatened is wearing on us and energetically damaging in multiple ways.

Another factor that affects energetic balance, is being raised in and/or practicing a patriarchal religion.  Within these religions traditional prescribed gender roles place an inordinate amount of responsibility on the male.  Being expected to be the "head of the household" -in whatever form that takes- just adds to the dominant energy over-load. And, even if you are not currently a devout practitioner of a patriarchal religion, that foundational belief system is an inherent part of this society, and affects us regularly, whether we realize it or not.

The expectation that men be the sexual pursuers, initiators, and more dominant sexual partner, stems from these religious beliefs, and also from inaccurate beliefs about women's relationship roles. Despite the feminist movement, old habits die hard, and it will be a long time before that particular discrepancy resolves.  And the current "feminist" movement, has now set in motion a new energetic imbalance that is causing submissives to become unduly submissive, and dominants to lose important daily outlets for discharging their energy.

Sometimes my clients have very few identifiable factors as to why they need to submit within their personal relationship, or in rare cases, none at all. In these instances the culprit tends to be unusually traumatic life events, whether acute or chronic, that have caused energetic imbalances.

Whether our inherent energy is dominant or submissive, we are always adapting to different environments and contexts by altering our behaviors, activities, and interpersonal interactions in order to fulfill various expectations - such as at work.  Most of us are acting in opposition to our energetic baseline of dominance/submission most of the time.  If you have inherently dominant energy and you behave in an excessively dominant manner, you are amplifying your existing dominant energy.  So, you have an energetic pressure-cooker on the submissive side, and an energetic fuse being blown on the dominant side. Both of these are considered energetic imbalances - not enough of one energy on one hand, and too much of one energy, on the other.  It is possible to have the inverse -repressed dominant and amplified submission- but it's not as common.  The lack of direct correlation between inherent energy and behavior is why it is difficult for people to tell whether their energy is inherently submissive or inherently dominant, because for the majority of their life most people have been behaving out of alignment with their true energy.

These cumulative effects tend to reach critical mass around age 45, which is the average age of my clients.  This is in large part because we do experience a human development stage around this age, where we are less inclined to do what others expect of us and are more inclined to take care of our own needs - in whatever way we see fit and despite what other people think. However, this critical mass happens around this age primarily because that is the average amount of time that the energetic self can tolerate an energetic imbalance before it just gets to be "too much" to bear.

I use a general assessment of inherent energy, based upon the age at which the urges arise.  If the urges begin around 35 (or younger), the odds are you have predominately submissive energy and are in the "pressure-cooker" group.  If these urges began closer to age 55 (or older), the odds are you have predominately dominant energy and are in the "fuse-blowing" group. Whether you are on the pressure cooker end or blown fuse end this will make the transition of your relationship, and what works and doesn't, somewhat different.

Through conscious use of behavior, activities, and interpersonal relations we are able to proactively counteract our own energetic imbalances.  Engaging in a cuckoldry relationship dynamic provides ample opportunity for both the dominant and submissive to create their own recipe for better energetic self-care.

People are rarely willing to alter their occupational status in order to obtain better energetic balance, and in many instances become "trapped" in the capitalist machine when they become responsible for the welfare of others. So where do people look to obtain energetic relief? Usually it is the part of their life they spend the second most amount of time engaging in - their personal relationships.  The easiest way to obtain energetic relief

through a personal relationship is to step down as the primary sexual provider. Taking sexual pressure off of yourself in this way is an act of submission.

So, if you are not ready to minimize your work stress for the sake of your own energetic balance, then you will automatically be drawn to being cuckolded, because choosing to give up your position as the primary sexual provider brings IMMENSE relief.  The irony is most people are not having a comprehensively fulfilling sexual relationship with their significant other to begin with, so that makes it even easier to cease being sexually proactive. It is important to note that once you experience this kind of relationship you will probably only ever be truly aroused by the cuckoldry relationship dynamic.  That is because the energetic relief you feel will become the number one motivator to remain the secondary sexual provider.

Jennifer DeLeon is a fetish educator and founder of Life Coaching With A Twist.  Feel free to contact her at Jennifer@lifecoachingwithatwist.com