Let me weave a vision for you.

There was a little boy who came to earth with a very specific mission. But when he squeezed his soul in through the keyhole entrance into the body, it was too big to fit. He pushed and pushed to get through, but some amount stayed stuck on the other side of the keyhole, which didn't allow the rest to get through without cutting completely in two. But this created a confusing experience for him, because the eyes of his soul were stuck on one side of the keyhole, but the ears were stuck on the other.

He quickly got used to this condition, and how to live on one side without ears, and the other side without eyes, but always aware of the extra work he had to do to integrate the information he was getting from each side. He lingered there like that, not knowing any different. But it eventually became apparent to him he was very different than the other people- they seemed to have made it through the keyhole without any problems, and had both their eyes and ears in one place. And over and over they told the boy how different he was from them, how something was wrong with him, each time laying a curse over the last curse until the the blanket was so heavy, he could barely move underneath it. It was so stifling that he could barely even breathe at times. And a dull roar filled his ears with grief and sadness. He struggled and struggled to break free, but he believed the blanket was too heavy.

His hope of ever getting his soul through the keyhole diminished, until the only thing he wanted was to just push back through the other side and hide there forever. So sometimes he would just sleep because it was the only relief he got. While he was sleeping he forgot so much. He forgot the mission. He forgot why he was even struggling in the first place.

But then a crow perched itself on the fence across from where the boy, who had now became a man, was dying. Crow opened his beak and out of it spiraled a radiant white light. The man could not see the light, because his eyes were on the other side of the keyhole, but he heard the high pitch ringing in his ears. Following the rhythm of the sound he began to discern words coming through: "Do not fret. Your soul was made too big to fit so that you would get stuck, half in and half out, unable to move. Such a predicament was orchestrated so that you could learn how to exist in two worlds, and develop your experience at maneuvering between them swiftly and with ease. You don't see it, because your eyes are on the other side, but pretty soon many are going to also find themselves in multiple places at once, and they aren't going to know how to manage it. You have trained your entire life for this coming time, when you will become their teacher. The ones who are to be your students will find you."

The man cried out, "But what of this blanket? It's so heavy I cannot even breathe! If I don't get relief soon I will suffocate, and surely I won't be of any use to anybody under it's weight!" The ringing pitch even higher, the crow replies, "For each that comes a layer of the blanket will be carried away by the East wind." And so it was. 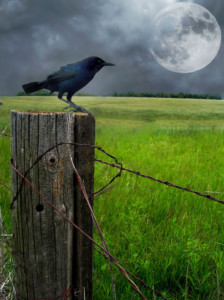 A story woven by Grandmother Storyteller, offered as a healing salve to a weary soul.